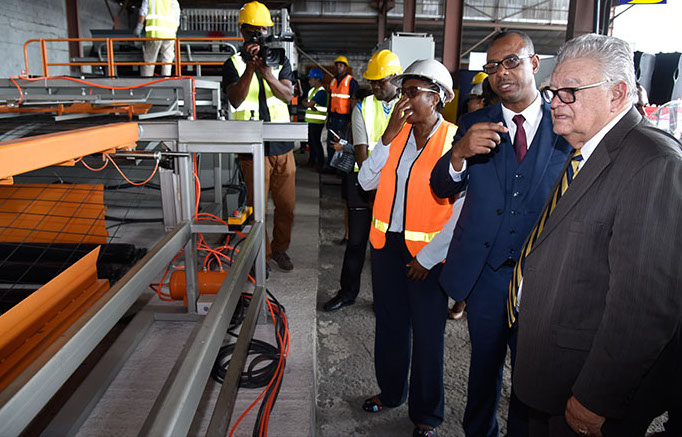 According to Minister Karl Samuda, his ministry has been working with the Ministry of Finance and the Public Service to obtain Caricom approval for ARC’s request for removal of duties for imported raw materials used in the production of its building materials, as well as recognition of its finished products as Jamaican-manufactured. This announcement was made at Tuesday’s launch of ARC’s new fabric mesh wire plant at its Bell Road factory in Kingston.

The agreement requires a substantial level of transformation of the imported elements used in producing the final products to protect it from the payment of duties in Jamaica and also to protect the finished product from attracting extra-Caricom duties.

Samuda told the attendees at Tuesday’s launch that he agrees that the building materials produced by ARC should qualify as finished products contributing to the housing stock in its final stages. However, he admitted that the ministry was having challenges getting that view accepted at the Caricom level.

“The products are having challenges being accepted as products which have been substantially transformed enough so that you can benefit from the protection of the government, and in Caricom under the Caricom trade agreement,” he said.

“However, I can promise you one thing: It is not a subject that has not been examined carefully by the Minister of Finance and myself, and we are almost at the stage where you will be given the kind of protection for what you are doing. Because, from my observation, you are transforming your raw materials into finished goods, and the transformation is substantial,” he added.

The minister said that he had been totally unaware of the level of technology applied in producing the finished products until his brief tour of the plant on Tuesday. He also expressed confidence that ARC’s request will be granted, based on the combination of the products being manufactured and the determination of ARC’s managing director, Norman Horne, to succeed.

Horne said that the new $200-million state-of-the-art fabric mesh machine would increase the production of its fabric mesh material manufactured by five times the current production levels from its two existing machines and, in addition, would increase its shipment of materials to clients in the United States considerably, while cutting energy costs by 60 per cent. Labour costs will also decrease, although employment for eight additional people will be provided.

However, Horne urged the government to introduce more barriers to imports in order to allow local manufacturers the opportunity to satisfy the domestic market.

At the same time, he insisted that setting up these barriers should not be seen as advocating protectionism, but as providing more incentives to put Jamaicans to work, as there were too many imports competing with domestic production.

Opposition spokesman on Industry, Investment and Competitiveness, Peter Bunting, suggested that the government look at reducing taxes paid by the business sector, because small businesses were being forced to remain in the informal sector in order to avoid taxation.

He said that this has resulted in more than 40 per cent of the GDP remaining in the informal sector, as sole proprietors refused to set up companies to do business in order to stay in the informal economy and avoid some taxes.

“So, a number of things can be done just in terms of how we structure our taxes to remove the incentives for informality,” Bunting said.

Other speakers at the launch included Jamaica Promotions Corporation (Jampro) President, Diane Edwards, who said that the new facility represents a “huge step” by ARC to boost its operations; and Jamaica Manufacturers’ Association (JMA) President, Metry Seaga, who noted that ARC’s “impressive” investment underscores the importance of the manufacturing sector in creating developmental opportunities, providing employment, contributing to the overall growth agenda, “and taking quality Jamaican-made products to the world”.

Published by the Jamaica Observer. 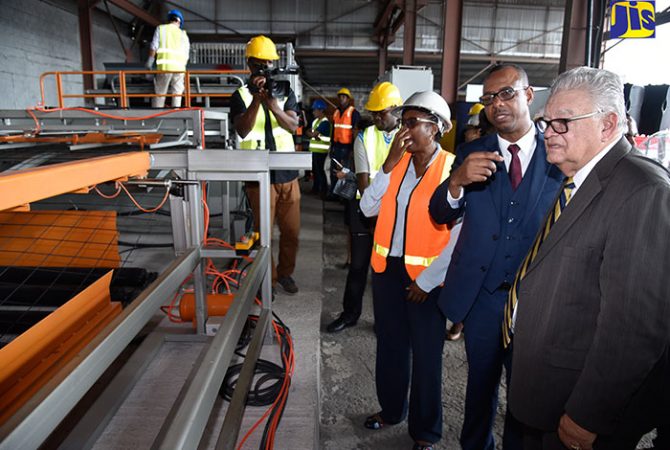 The facility, which was commissioned into service on Tuesday (November 21), produces fabric mesh sheets and rolls that are used as reinforcement materials in construction.

It will enable the company, which is one of Jamaica’s well-established manufacturers and distributors of building materials, to better serve its clients locally as well as in the United States.

Mr. Samuda, who briefly toured ARC’s complex on Tuesday (November 21), said he was impressed with the operations, which reflected innovation and the use of technology.

“In manufacturing, unless you innovate, you are not going to achieve the levels of profit that really should attend your business. Additionally, the application of appropriate technology (and) the use of new techniques in the development of the products that we market (are steps) in the right direction,” he contended.

Mr. Samuda assured the management and staff of ARC that “you have my 100 per cent support for the efforts that you have been making”.

He said this will enable ARC to increase its shipment of materials for clients in the United States from two to 10.

Additionally, he said the facility is projected to cut energy cost by six per cent, and provide employment for eight additional persons.

“I believe that the benefits of this development to Jamaica are numerous, as the local stock of high-quality material (will be) increased, while simultaneously (boosting) export revenue and the prestige of brand Jamaica,” Mr. Horne added.

“This $200-million investment demonstrates clearly that manufacturing in Jamaica is viable and competitive, and that we can successfully export quality building products to the region,” she said.

The JAMPRO President said the incorporation of technology in the production line was also welcome, pointing out that “this is really taking Jamaica into the 21st century”.

She added that ARC is “leading the way in manufacturing in Jamaica with a commitment to excellence”.

“What this shows is that opportunities are available and are being pursued by those who are willing to make sacrifices to adjust to the changing market dynamics and embrace innovation. This is the only way we can propel our country into becoming a place where we can truly live, work, raise families and build enterprises,” he added.

Published by the Jamaica Information Service.