Had it not been for a certain unforeseen hiccup, ARC Manufacturing Company Ltd, one of the senior players in the construction supplies industry, would have been partly-owned by Jamaican shareholders already.

But the delay will not last for long, the company’s Executive Chairman Norman Horne has promised, with a new objective time frame of early next year waiting in the wings.

“ARC Manufacturing has grown sufficiently that the public can now participate by becoming shareholders of this company,” Horne said in a wide-ranging interview with the Jamaica Observer last week that included, among other things, his journey from boyhood to becoming an adult, his political career, and the years that he has spent running business.

“I would like ARC Manufacturing to become an institution in Jamaica that will survive me and my heirs or children and their children’s children. That’s where I would want to take the business,” he said.

The prospectus is being prepared and work is advanced as the company prepares to embark on another phase of history, the company’s main man stated.

“We have engaged the attorney-at-law. We have decided on the brokerage firm; we have identified the chartered accountants that will be working on this, and work is in progress. This will be a very good option for Jamaicans,” Horne insisted. “ARC has been a fundamental player in the building material industry, an area that there still exists tremendous demand for housing, infrastructure, for commercial development. and clearly, 30 years ago, countries like the Cayman Islands, The Bahamas, and Panama were way behind Jamaica in her development. Today, they are far ahead. There is so much more that Jamaica needs to do to invest in her infrastructure, whether in being able to deliver a hundred per cent potable water, a hundred per cent electricity, important sewer systems; get rid of this nonsensical behaviour where we build roads to nowhere and create more communities where social facilities can be shared.

Horne said that Jamaica had the land space for vast expansion and agreed with Prime Minister Andrew Holness that it was time to “go up” meaning, more high-rise buildings would be better for the island’s development as it increases its structural stock.

“Singapore is smaller than Jamaica and has 10 times the infrastructure and development of Jamaica. We have the space, and we still have enough space, too, to do more in the field of agriculture,” Horne emphasised. 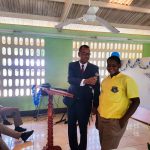 ARC Manufacturing is one of the leading manufacturers and distributors of premium-quality building materials in Jamaica. Our range of products and services include wire and steel products, chain-link fencing, aluminum-steel roofing tiles and more. The 18-acre plant features seven factories, including a state-of-the-art lumber treatment plant.